For Steven Mesia, hunting, fishing and sailing are year round activities! But with each change of the seasons, the game list also sees a change.  In Alabama, hunters have a new target to set their sights on — one that hasn’t been eligible for legal hunting in over a century! For the first time since 1916, hunters in Alabama will now be able to track and hunt sandhill cranes.

Some hunters are traditional, aiming for game that they can take home to make use of, like deer and fish.  Others enjoy the thrill of the chase and gravitate towards unique game that fuels their adventurous spirit.  If you find yourself clustered in with the latter, then you’ll be excited to learn that in Alabama, there’s new game to be hunted: sandhill cranes. 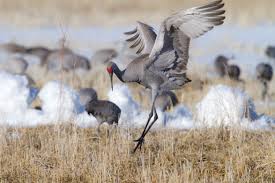 In the late 19th and early 20th centuries, several bird species were grossly over-hunted.  This exploitation drove population numbers near to extinction. In particular, sandhill cranes experienced quite a hit.  In 1925, it was reported that as few as 50 sandhill cranes remained along the Mississippi River. This devastating news forced states to enact all-new game laws.  In order to remedy the situation, hunting sandhill cranes effectively became illegal.

Now, the recorded population of sandhill cranes along the Mississippi River has increased dramatically, with reports tallying over 98,000 birds.  This news has altered current game laws in Kentucky and Tennessee, where it is now fully legal to hunt sandhill cranes. With the population total on the rise, Alabama has since decided to follow suit.

This development is exciting news for hunters in Alabama who are looking for new game to pursue!  Even for traditional hunters who prefer to make use of their game, this change will be quite thrilling.  After all, the sandhill cranes must be nicknamed “the ribeye of the sky” for a reason!

Although hunting will open soon, sandhill cranes still won’t be an available game for everyone.  Alabama will be offering 400 hunting permits, with hunters chosen via random draw. Regardless, this is certainly an interesting moment in hunting history!

Stay tuned for more hunting, fishing and sailing advice from avid outdoorsman, Steven Mesia.  Also, be sure to follow him on Behance for tidbits and anecdotes on his hunting experiences!